My First Flight After the Lockdown Was An Experience...

I learned more from this trip than all of my previous trips combined!

If you have ever been interested in learning more about your spiritual self, then you need to read this amazing story about how a beautiful and spiritual necklace changed my life. Here’s why:

I’m not going to lie. It was a night of the Pisces full moon, also known as the ‘Harvest moon’, and not only that, it was my first flight after lockdown. I was supposed to be feeling happy and spiritually balanced, but for some reason, I wasn’t.

I previous weeks of lockdowns had really made me feel less in tune with myself, and more stressed and anxious than I’d ever felt before. Everything from my sleeping, diet, grooming and beauty habits had been affected. I even stopped doing yoga and meditation, which had previously been my favorite activities to do in the world, helping keep me balanced and feeling in tune with my inner self.

The truth was, even though it seemed that things were fine from the outside, over the last couple months my inner light had been slowly but surely fading away.

So fast forward until I got on my flight, wiped down the seat and cleaned my hands over and over again… until I was fully settled in. That’s when I glanced over to the person next to me and realized what I had been doing wrong the whole time!

So here’s what happened

During my flight I sat next to a stunning tall beauty (who I’m pretty sure was some kind of supermodel!). She was exotic, beautiful and had a calm, serene look on her face.

The thing I noticed above anything else was what she was wearing. Around her neck she wore the most beautiful and unusual necklace I had ever seen. It was a string of beautiful blue beads that reflected the light in the most stunning way. I’m an avid collector of stones and crystals and I could just feel the energy coming out from it.

As I started to pack up my luggage, I noticed her doing something strange with the beads. She was counting them in between her thumb and her index finger, with her eyes closed as she mumbled words under her breath.

When she finished, I decided to speak to her.

“That’s such a gorgeous looking necklace!” I said to her.

“Oh, I can’t live without this. I used to keep all sorts of stones and crystals of different types and different shapes. But this I can wear when I travel,” she said to me.

I asked her why and she said,

“It’s more than just a necklace. It’s called a mala and it was invented by Buddhist monks in Tibet to keep them mindful when meditating. Because of all the crazy things going around in the world, we really need all the help we can get to keep us in tune with our inner selves and spiritually balanced. This mala is beautiful, has such a color and feel, and is a reminder for me to always practice my intentions.”

“It’s made from Lapis Lazuli, which has been treasured by royalty, priests and holy healers for thousands of years.”

“Apparently, Lapis Lazuli was the favourite stone of the Ancient Egyptions. They thought it contains immortal powers and is all about stories, history and authenticity.”

“To be honest, my life used to be a complete mess. I worked an office job I absolutely hated and always felt stressed out and anxious. I was so focused on making money that I was always unhappy. When I found my Lapis Lazuli mala and started wearing it, it felt like a security blanket that protected and empowered me. It almost seemed to talk to me, and reminded me that there was more to life than spending all my time in a cubicle. The next month, I quit my office job to open a successful yoga studio.”

When it became time to get off the plane, we said our goodbyes and she told me where to get the Lapis Lazuli mala.

If I didn’t feel the aura of the Lapis Lazuli in person and hear the woman’s story, I wouldn’t have believed how a piece of jewelry could have such an impact on someone’s life. 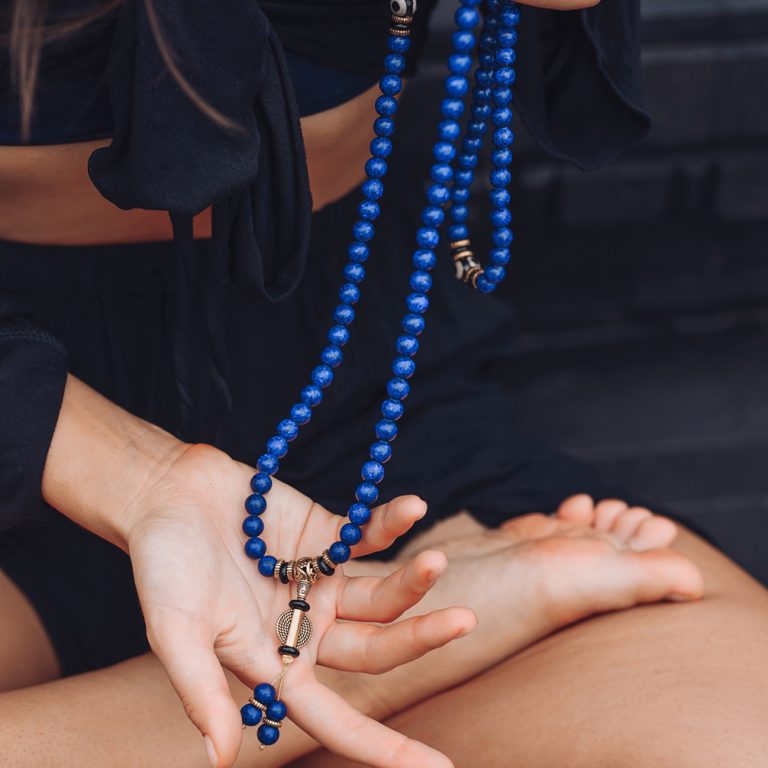 I needed to get this magical necklace. As soon as I got home, I went to do a bit of research. This mala necklace was the real thing! It has hundreds of customers from all walks of life – moms, dads, yoga and meditation teachers, psychologists and CEOs. Those who use the mala are impressed by its quality and claim it helps them meditate, destress and remain in tune with their inner, spiritual selves.

Not just a fashion accessory

It’s not hard to find a necklace that looks good, but most necklaces only look pretty and don’t do anything else. The spiritual design of the mala, inspired by the Tibetan tradition and the spiritual properties of Lapis Lazuli makes it so much more than just a necklace.

I’m happy to share how dazzling these blessed, blue beads are once your eyes behold their beauty upon opening! Such craftsman’s ship in design!

Unparalleled. Thank you! It’s reassuring that in the times we are all facing that quality products are still being produced.

This mala necklace based on traditional Tibetan mala designs. It is specifically designed to have 108 beads, which is an important and spiritual number in Tibetan culture. When the number 108 appears in our lives, it is said to mean we are about to attain  a long-desired goal or achievement.

It’s now been five months since I received learned about the mysterious necklace on that plane ride. Since then, so much in my life has changed.

I’ve since learned that everything the woman told me on that plane trip was true. The beaded necklace is called a ‘mala’ and they’ve been used by Tibetan monks for their spiritual practices for thousands of years. The one I got is made from a stone called Lapis Lazuli, and according to my research, cultures all around the world from Ancient Egypt to South America have attributed powerful spiritual effects to the stone.

After my experiences, I believe the power of crystals is real and so is the power of manifestation. If you are the type of person who seeks the ability to see and sense the world you would like for yourself, I recommend the Lapis Lazuli Clairvoyancy Mala. 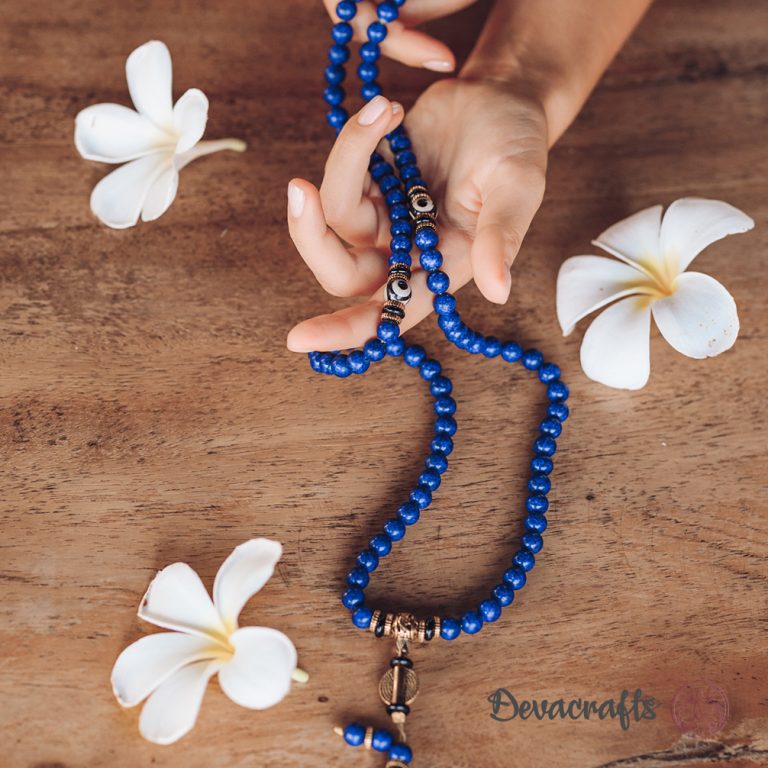 As a special introductory sale, Devacrafts is now offering A Mysterious Free Gift Worth $40 with each purchase, only for new customers.

Plus, if you aren’t totally happy with your Lapis Lazuli Clairvoyancy Mala, return them for a full refund within 30 days. No questions asked!

The Lapis Lazuli Clairvoyancy Mala makes a great gift for both men and women! Click here to check Availability >>

Click the link above to see if Devacrafts is still a free gift with the Mala and free shipping.